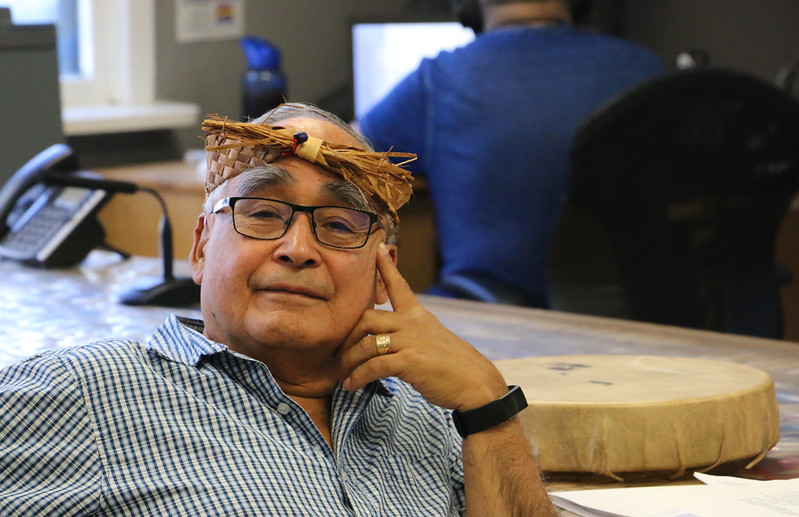 In 2019, at a Council of Ha’wiih Forum on Fisheries, the Council of The Haida Nation and the Ha’wiih expressed their shared concerns about the impacts of human activities on future generations and the need for improved protection of ocean and marine species and ensuring ecologically sustainable fisheries.

Together, they outlined topics for collaboration on oceans issues in an Agreement for Collaboration on Oceans Issues and planned the one-day virtual Oceans Dialogue Forum.

The purpose of the Forum was to create that space of knowledge and information sharing with the following objectives:

On December 2, 2020, representatives from Haida and Nuu-chah-nulth met online to discuss important oceans issues at the first ever Oceans Dialogue Forum.

The Forum, which was co-chaired by Haida Nation Vice President Trevor Russ and Cliff Atleo, Chair – Nuu-chah-nulth Council of Ha’wiih, began with a powerful opening and welcoming song by two Haida youth.

The first presentation and discussion topic, Tang.Gwan · ?a?x?iqak · Tsig?is Marine Protected Area, centered around co-management. Options for internal dispute resolution were shared, and considerations for selecting the management board were discussed noting Haida’s experience with the Archipelago management Board. It was also noted that creating an atmosphere for working together and acknowledging the significant responsibility of choosing board members are important considerations.

Relationship-building emerged as a strong theme during discussions with the need to be strategic and set the tone with DFO highlighting First Nations’ experience in managing the natural world. There was also strong interest expressed in bringing Makah and Heiltsuk into the MPA conversation. Makah are closely related to Nuu-chah-nulth with common concerns, in addition to having experience in dealing with their state and federal governments.

Haida and Nuu-chah-nulth litigation and negotiation regarding title and fishing rights were also presented and discussed.

“We are in dangerous times – science must take precedence over fisheries management politics in working to protect our salmon stocks … First Nations need to advocate for what they want through collaboration,” noted a Forum participant.

Concerns were raised around a number of key issues: lack of negotiation and working within a prescriptive system, reconciliation being used as a stalling tactic by government, human introduced impacts such as fish farms, sport fishing, the injustice between Aboriginal rights fishery and commercial fishery,  rights-based fishery and associated boundaries, disparities between technology limits (no hydraulic gear retrieval) and technology requirements (expensive DFO-imposed monitoring equipment) further entrenching First Nations fishers. “Our rights don’t mean anything if we don’t have any fish,” stated a participant.

Time constraints at the December 2 Forum limited more in-depth discussions on additional topics presented such as herring rebuilding, trawl fishery, safe distance offshore and sea otters, but the need for further discussion was noted and opportunity will be provided at the next Oceans Dialogue Forum.

Additionally, due to the significant and complex sea otter topic, a separate workshop is being planned for March 3, for leadership and technical staff to discuss issues and areas for collaboration to be reported back on at the next Forum which is tentatively planned for the fall.