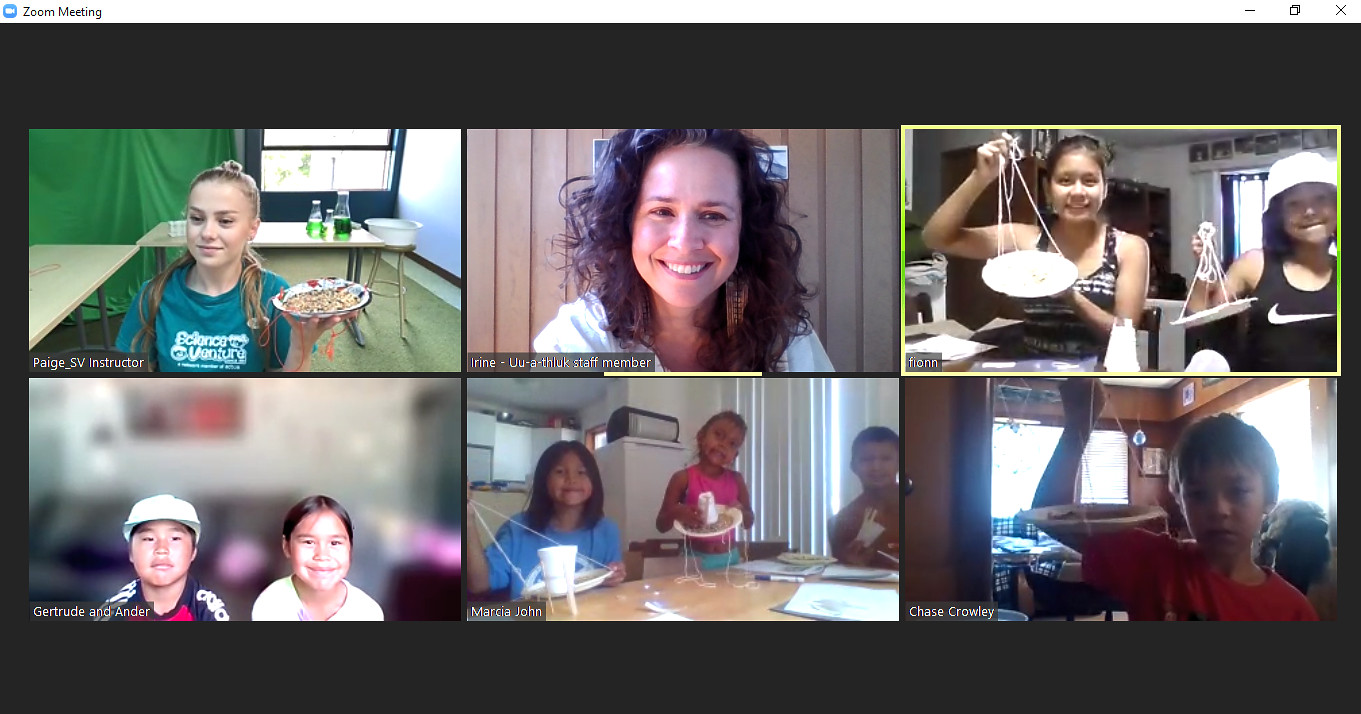 There are few things that can spark a child’s interest more than a box to open, and a science experiment that might get messy. Last month’s Uu-a-thluk summer science camps provided both of those, and a little bit more.

“The thoughtfully organized and supportive structure of this camp for our children and families has been wonderfully impactful in expanding my daughter’s curiosity and commitment for learning science in a fun way,” said Melissa Gus of Tseshaht First Nation.

Since 2005, Uu-a-thluk and Science Venture (University of Victoria) have worked with Nuu-chah-nulth communities to deliver summer science camps that expose Nuu-chah-nulth children to scientific topics, with the aim to build their self-confidence and encourage them to pursue studies in the sciences.

By engaging Nuu-chah-nulth kids and youth in STEM subjects in a fun and hands-on way, camp collaborators hope to inspire children and help them realize science is an area of study they can take part in, and potentially grow into a career one day.

“The importance of reaching even one child through these amazing camps is life long,” added Gus.

This year’s week-long science camps were delivered virtually, for the second year in a row, as a result of ongoing COVID-19 safety measures.

“The difference between last year and this year is that this year we were able to deliver activity kits to the houses and Nation offices,” said Alison Wale, Uu-a-thluk Capacity Building Coordinator.

Wale is referring to the exciting addition of the packages Science Venture provided that included materials and instructions needed for campers to try activities and experiments at home, or with their community members.

“Science Venture had everything laid out – when you opened a box, there were individual bags that had each day’s activities broken up, and a little how-to in each bag for the parents if they needed assistance,” Wale added.

The daily one-hour camp lessons and corresponding activity materials covered a range of topics including backyard birds, forest fire biodiversity, insects and volcanoes. During the lesson, kids and youth aged seven to 13 followed along as Science Venture instructors Lyndsay, Paige and Emma explained the theory behind a topic using videos and visuals, and then demonstrated the activity that brought the topic to life.

Campers were invited to create their own sand volcanoes, backyard bird feeders, bug motels and sustainable “rooftops” after the lesson, with the supervision of an adult.

Jason Sam, Nuu-chah-nulth Education Worker at Ucluelet Secondary School, facilitated a camp in Hitacu that saw youth from three Nuu-chah-nulth Nations gathering in the STEM program room daily. The group (which was slightly older and included youth aged 13-18) focused on soil and water testing, and ventured out to the nearby harbour, mud flats and creek for sampling. They were also fortunate to have an Elder present throughout the week who imparted valuable Nuu-chah-nulth knowledge.

“It was a little difficult engaging via Zoom at first,” said Sam. “However, one youth had done a bunch of the tests before and led the way fully on her own.  She saw the opportunity to lead and took it.”

For the younger kids, experiments got sticky, and did not always come out looking like the instructors’ demonstration, but they were fun and opened up a world of possibilities.

David Jackson, Science Venture’s Manager of Programs, was instrumental in the delivery of the camps by accommodating the Nations’ needs as they arose, including assembling and couriering camp kits on short notice.

Wale was able to deliver 72 kits to various households and Nuu-chah-nulth First Nation offices; approximately 40 of those kits will be used during fall programming, as at least five nations have deferred participation in summer camps in favour of hosting them throughout the school year.

Any Nuu-chah-nulth Nations that did not host a summer camp, that are interested in coordinating one for the school year, should contact Wale at alison.wale@nuuchahnulth.org or 250-735-5684.

For more information about science camps, or to sponsor a child for next year’s camps, visit www.uuathluk.ca.

klecko klecko (thank you) to our steadfast partners Science Venture and to Nuu-chah-nulth Nation community members for bringing 2021 virtual science camps to life.