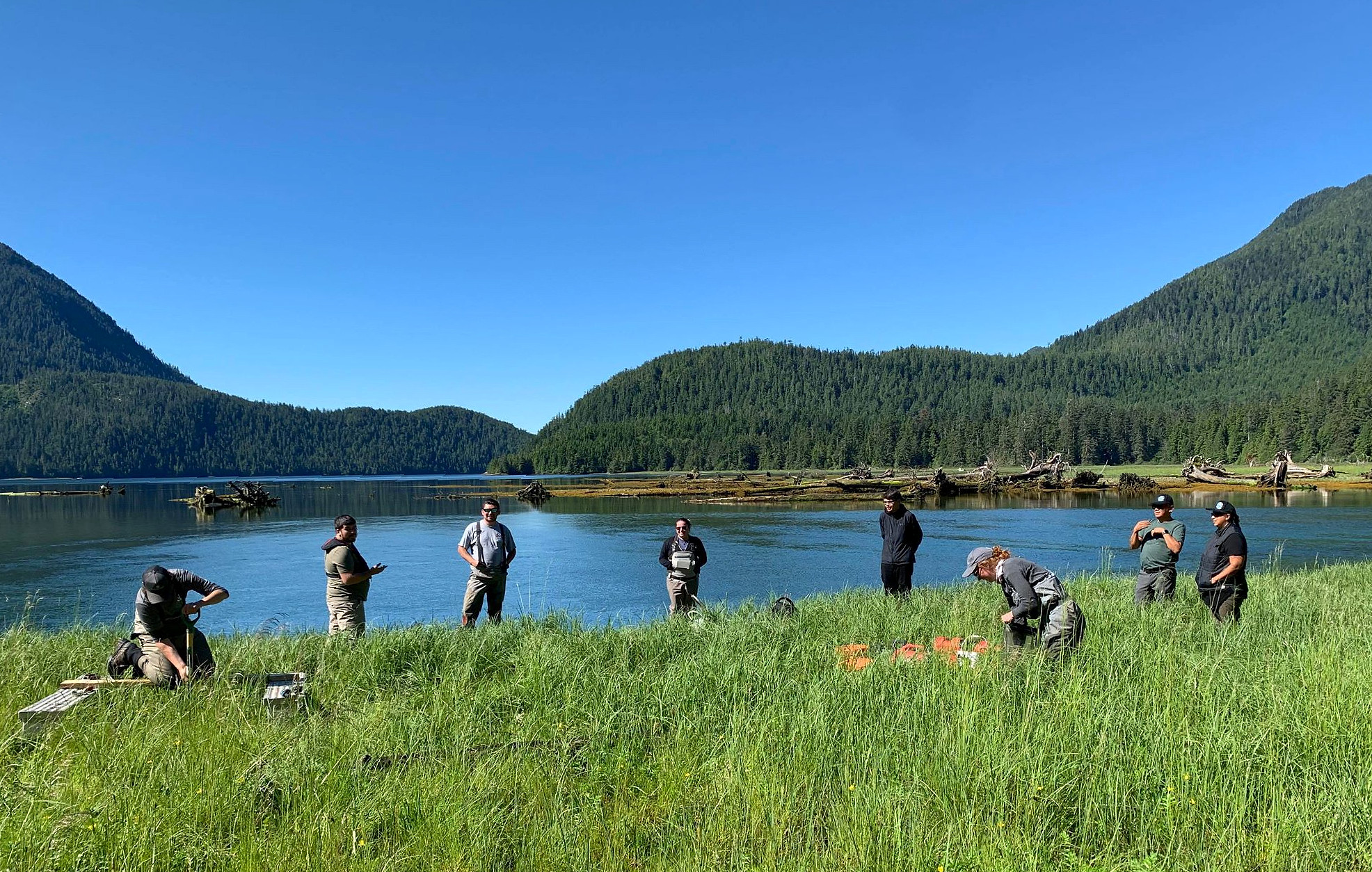 In an effort to gain a better understanding of the susceptibility of its estuaries to climate change impacts, Ahousaht First Nation has partnered with The Nature Trust of BC, and with assistance from Uu-a-thluk, has embarked on an estuary monitoring project at the Moyeha River estuary.

The project will evaluate the ability of the Moyeha estuary tidal marsh to persist and thrive in the face of climate change impacts and will identify potential restoration projects based on the monitoring results.

“The program is an extension of the research conducted by the U.S. National Estuarine Research Reserve Association along the west coast of the United States,” said Jared, Dick, Uu-a-thluk Central Region Biologist.

Funded by the BC Salmon Restoration and Innovation Fund, the five-year project uses the MARS (Marsh Resilience to Sea Level Rise) tool, which was developed by the Association, in a phased approach.

Phase one (years one to three) consists of monitoring and research to assess estuary resilience to sea-level rise, while phase two will focus on the implementation of significant restoration projects aimed at restoring core estuarine processes.

Fifteen west coast BC estuaries have been selected for the project, including sites on Vancouver Island, the central coast and Haida Gwaii. In 2020, two sites in Nuu-chah-nulth territory were confirmed: the Moyeha River estuary in Ahousaht, and the Kaouk River estuary in  Ka:’yu:’k’t’h/Che:k’tle7et’h’.

The Moyeha estuary was not originally a proposed site. Dick suggested the estuary because of its unlogged, intact state following Thomas Reid’s (West Coast Conservation Land Manager, The Nature Trust of BC) presentation on the estuary monitoring program at an Area 24 Salmon Roundtable meeting in Fall 2019.

“One of the reasons Moyeha was selected is that it is in relatively pristine condition and provides us with a good ‘reference’ site when assessing the other estuaries included in our project; some of which have been heavily impacted,” said Reid in an email to Uu-a-thluk.

The easing of BC’s COVID-19 restrictions in June allowed for Reid’s team (who are all Vancouver Island-based and have not left the island since  mid-March) to drive their boat to Tofino and stay at the Tin Wis Resort versus flying in, camping at the site and relying on Ahousaht’s boat for travel to and around the estuary.

“They’d never been there before – they’d only seen satellite images,” remarked Dick.

The team spent the majority of their time installing monitoring equipment, and had a small window of opportunity to conduct the work, June 27 to July 4, based on tides.

Over the course of three days, they installed deep and shallow rSETs (monitoring devices that track sediment elevation) and turbidity meters, and also logged water quality measurements using a complex device called an RBR Maestro3. Drone surveys were conducted on the third day, for the purpose of estuary mapping.

Data collected will fall under one of five categories of estuary resilience to sea level rise: distribution of marsh elevation, change in elevation, sediment supply, tidal range and rate of sea level rise. It will then be used to generate an overall ‘resilience score.’

Based on that score, The Nature Trust of BC will develop potential restoration projects at the Moyeha estuary in collaboration with Ahousaht First Nation and Uu-a-thluk.

Ahousaht’s participation in the estuary resilience study has provided capacity building opportunities for the nation that will continue for at least the next three years.

Fisheries staff members were trained on the use of the RBR Maestro3, and according to their contract with The Nature Trust of BC, will be taking water quality measurements at different sites throughout the Moyeha estuary 16 times per year.

In addition, Ahousaht and Uu-a-thluk fisheries staff have been offered the use of the RBR Maestro3 for their own monitoring projects such as the juvenile salmon out-migration project at the Bedwell River.

Unlike some ‘helicopter research’ projects that see non-local scientists entering communities and not engaging community members in their work, the collaborative approach taken by The Nature Trust of BC has empowered Ahousaht fisheries staff to continue certain components of the monitoring independently.

In a time of a global pandemic, when travel and access to remote communities has ceased entirely during ‘lockdowns,’ this type of capacity building could be critical in avoiding dataset gaps, and in maintaining project momentum.

“To be honest, this project would not be happening if we did not have our Coastal First Nation partners – their involvement is critical to success,’ observed Reid.

“The depth of knowledge and experience these Nations have brought to this project is phenomenal.”