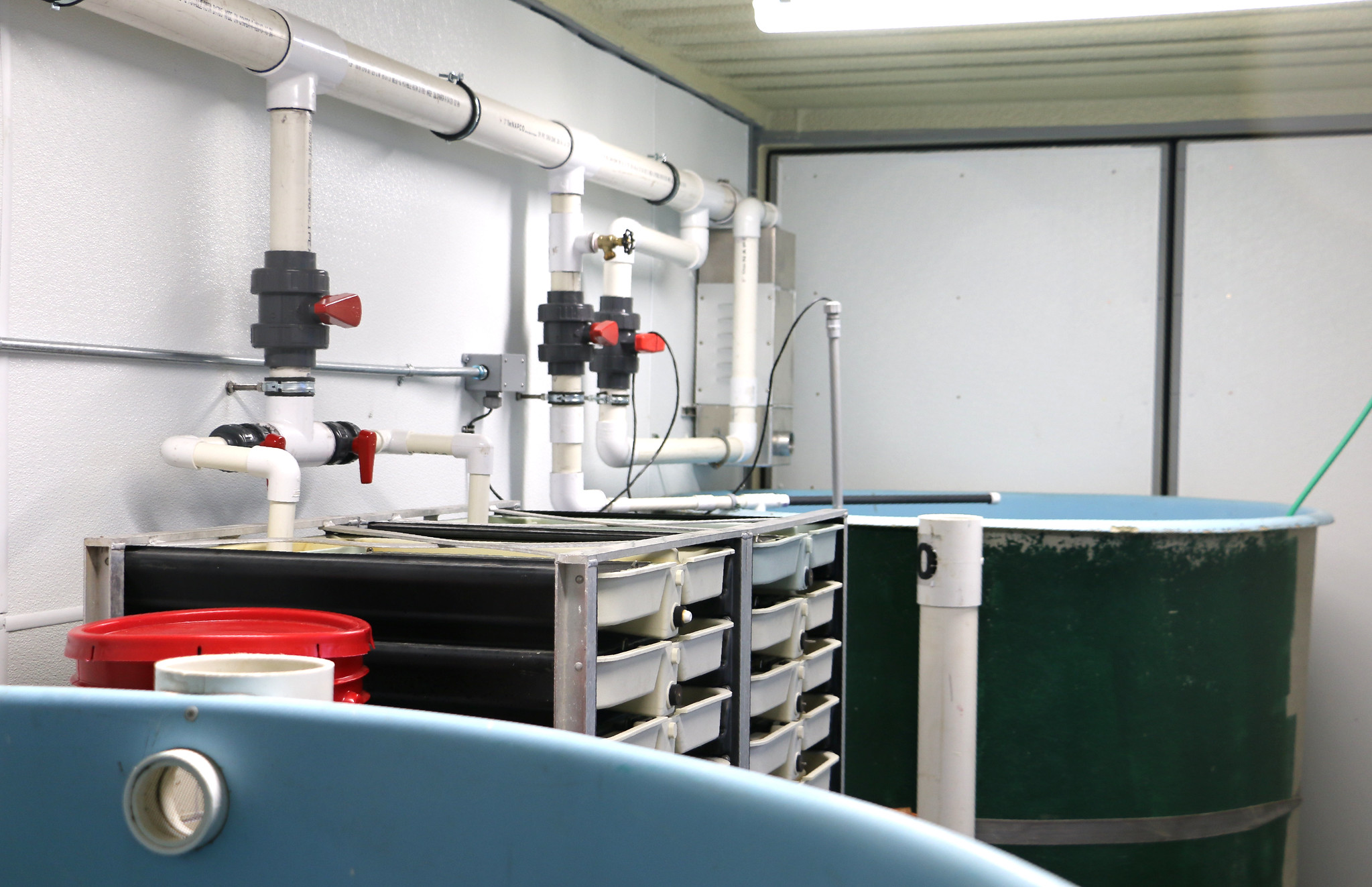 Ahousaht Fisheries staff is working on bringing hink?uu?as (chum salmon) back to the village of Maaqutusiis.

With support from Maaqutusiis Hahoulthee Stewardship Society (MHSS), Uu-a-thluk and Cermaq, the nation has set up a new ‘hatchery in a box’ in response to rapidly declining hink?uu?as populations that have affected community members’ ability to secure food fish.

“There hasn’t been a hatchery here for a long time…my job was to bring this opportunity and not just bring fish back to our territory, but jobs too,” said Luke Swan, Ahousaht Fisheries Manager, while touring the hatchery site on a rainy day in early November.

Ahousaht has been enhancing Anderson Creek hink?uu?as on and off for approximately 25 years, but this is the first time they’ll be hatching fish in a sea can.

“The ‘hatchery in a box’ was conceived and built by the Okanagan Nation Alliance (ONA) as a response to enhancing wild stocks of salmon within Traditional Territories,” said Norman Johnson, Senior Biologist with ONA.

Johnson added that it was “the need for a low-cost solution to getting more fish in the water” that prompted its early development back in 2017.

Ranging in cost from $37,000 – $65,000 (depending on the purchaser’s equipment needs), the 20-foot (new) sea cans feature custom Styrofoam insulation, washable interior fibreglass panelling and the equipment needed for a productive hatchery, including: incubators for up to 100,000 eggs, two six-foot round rearing tanks, Red Seal plumbing and electrical systems and a custom alarm system that will call out via phone/text and is also accessible through a Wi-Fi connection.

Each First Nation (or other purchaser) must provide a water and electrical connection for the ‘hatchery in a box’; in Ahousaht’s case, the hatchery will draw raw water from Anderson Creek, from its location in Maaqutusiis village. MHSS has installed water quality loggers, and data collected since early summer indicate the water is passing the requirements needed to raise hink?uu?as.

ONA provides a four-module training program at their Penticton hatchery, all necessary Standard Operating Procedures to operate the hatchery and a health management plan that can be filed with Fisheries and Oceans Canada (DFO).

Hasheukemiss, Ahousaht H?aw?ilth (hereditary chief), Swan and Johnson agree that the hatchery is just one part of a salmon rebuilding strategy; a tool to be used in collaboration with other initiatives. According to Johnson, it should be the opening tool, as nations have an opportunity to work on rebuilding projects in the four years that follow a spring fry release, while they wait for fish to return.

The MHSS Stewardship Guardian Program has also instituted a $15 per head charge for recreational fishers fishing in Ahousaht waters, with the intention of investing the fees into river restoration and salmon enhancement.

“Our main goal is to rebuild. Rebuild the territory. The fish stocks. Not just chum,” said Swan.

Swan would like to see Maaqutusiis Elementary School students involved in the hatchery, and inspired by it, like he once was as a youth.

“My hope is that it’ll give them a sense of belonging, knowing they’re part of bringing up fish that will help the whole territory,” he explained. “From there, we hope to build more, maybe a different style hatchery.”

O’Farrell cites Atleo River hink?uu?as as the next salmon species Ahousaht would likely target through the sea can hatchery. Restoration work on the Atleo has commenced, and the hatchery focus would coincide well with that work.

The long-term goal, according to Hasheukemiss, is “to revitalize all of our wild stocks that are near extinction – to give them a chance.”

“Being able to have smokers going all fall with chum in Ahousaht again. The other one is potentially having terminal chum fishery opportunities in some of these systems that could be economically viable.”

For more information on the ‘hatchery in a box’ model, or to arrange a viewing of a demo unit in Coombs, B.C., contact Norman Johnson at njohnson@syilx.org or 250-479-3221.