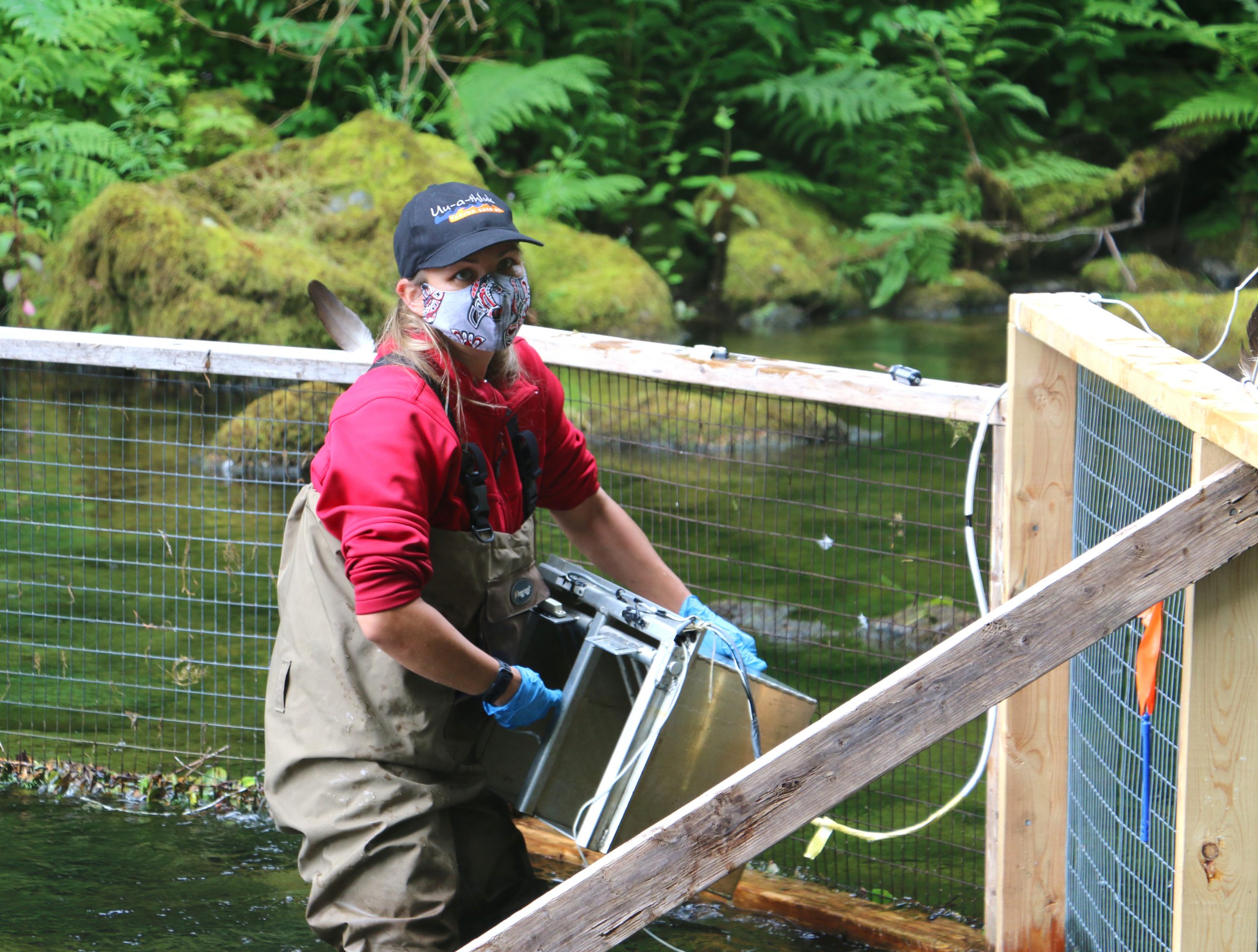 A fresh voice has entered the discussion about assessing wildlife species at risk in Canada, and she works for Nuu-chah-nulth Nations.

Southern Region Biologist Sabrina Crowley (Huu-yiik) recently accepted a position on a specialists committee for the Committee on the Status of Endangered Wildlife in Canada (COSEWIC). The position will see her contributing expertise on marine fish species across the country.

Having grown up in the Uchucklesaht village of Ehthalteese, Crowley has an intimate connection with coastal resources. She spent her early years learning from her late grandparents, Samson and Helen (Rush) Robinson, and her parents, Phyllis and John Halvorsen. After completing her post-secondary education in fisheries science, Crowley started working with Uu-a-thluk as an associate biologist, taking over as biologist for the Southern Region in 2020.

Her work means that she is no stranger to COSEWIC and the impact the committee has on species in Nuu-chah-nulth territories. Canada created the committee in 1977 to help classify and preserve species at risk of extinction. Each year COSEWIC advisors meet to assign risk categories for mammals, birds, reptiles, amphibians, fish, invertebrates and plants covered by the current mandate.

Advisors to COSEWIC are wildlife biology experts like Crowley—ranging from academics to government and non-government employees. COSEWIC itself is an advisory panel to the Minister of the Environment and Climate Change.

Over the years, the committee has evolved to cover more species and more ways of gathering information. In 2000, COSEWIC added a new subcommittee to make sure the assessment process took aboriginal traditional knowledge (ATK) into account. It was through this subcommittee that Crowley first connected with COSEWIC.

Crowley followed up this work with several more reports. All the while, her interest grew. She noticed that while the sub-committee for aboriginal traditional knowledge played an important role, it had to cover all the species at risk in Canada. “I thought it would be great to have First Nations sitting on the specialists committee too,” she says.

Nuu-chah-nulth Ha’wiih agreed. In 2013, while discussing related issues at the Council of Ha’wiih Forum on Fisheries, they collectively asked for representation in the COSEWIC process. However, earning a place on the specialists committee wasn’t easy. Crowley tried three times before being accepted. Finally, her persistence paid off. Her four-year appointment began in January of 2021. If she enjoys the experience and wants to continue, she’s eligible for re-appointment in 2025.

So far, she is fascinated by the process. During her first few meetings, Crowley and her colleagues looked at the state of Atlantic and Pacific groundfish.

“It’s interesting to see what triggers the committee considers…They’re putting species that need to be reassessed in 2022 through a model and saying ‘Where are we now? Will there be new information? Out of what we know so far, do you think this looks reasonable?’”

With many species to review, Crowley acknowledges the workload might be heavy—but the job is an important one.

“We’re always talking about rebuilding plans and trying to do what we can to save the stocks that we do have…Given the state of our resources, COSEWIC seemed like a good fit in terms of which direction we’re going in right now.”

The work is also something that deeply interests Crowley. As someone who grew up on the lands and waters, she wants to better understand the processes that go into managing threatened and endangered resources.

“It’s something that I really enjoy doing. Being able to see the different angles, being part of different committees, I get to see how information is incorporated, how decisions are reached. I think it’s good that we are involved.”

For more information on the Committee on the Status of Endangered Wildlife in Canada (COSEWIC), visit https://cosewic.ca/index.php/en-ca/.