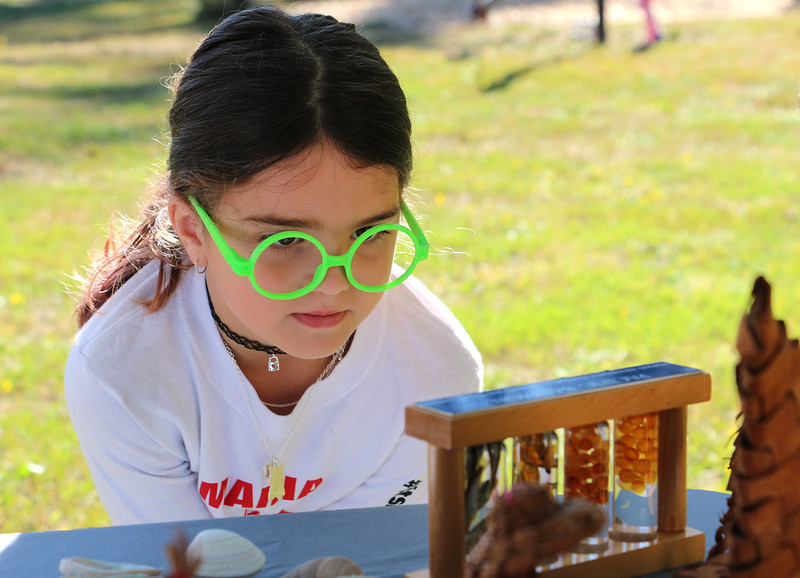 On a beautiful day in late September, Uu-a-thluk staff had the opportunity to connect with local community members during the first annual Alberni Valley Rivers Day event.

The inaugural event was split between two sites, at the Beaver Creek Community Hall and Stamp River Provincial Park (which were connected by shuttle bus), and drew approximately 500 guests which included many families with small children.

“The turnout was great considering the locations were a bit out of the way and it was the very first event,” said Danielle Burrows, Uu-a-thluk’s Protected Areas Planner.

Tanya Shannon of the Alberni-Clayoquot Regional District (ACRD) and Fisheries and Oceans Canada’s (DFO) Erica Blake worked together to coordinate the event which was an extension of larger BC Rivers Day and World Rivers Day events.

Rivers Day has been taking place in western Canada on the fourth Sunday of September since 1980, when internationally renowned river conservationist Mark Angelo and the Outdoor Recreation Council of BC founded the event.

Since 2005, it has been recognized on a global scale through World Rivers Day events, following the United Nations’ adoption of Angelo’s proposal to their Water for Life Decade (which aimed to create a greater awareness of the need to better steward our water resources).

Dave Clough, Registered Professional Biologist, who is well-known within the Alberni Valley for guiding school-aged kids into Kitsuksis Creek to release salmon fry, was also on hand.

Squeals and laughter could be heard coming from Clough’s “aquatic invertebrates” set up, which consisted of a few buckets, live specimens and a lot of enthusiasm.

At the fish painting booth, guests were invited to paint real or rubber fish with the colour(s) of their liking, and to use them to create an original print on kraft paper. The booth produced a collection of prints that could be seen drying in the sun as they hung from the community hall’s stair railings.

Over at Uu-a-thluk’s tent, kids were invited to experience something some of them had never tried before.

While some were fans of the flavour and texture, others were not, but what mattered was the opportunity the exchange provided for greater dialogue around the important role Nuu-chah-nulth have played, and continue to play, as c?ac?aa?uk (river keepers).

Visitors to the booth were also educated on the Nuu-chah-nulth principle of his?uk?is? c?awaak (everything is connected, everything is one), and why watersheds are critical to the well-being of our ecosystem.

“Nuu-chah-nulth have deep cultural, food and ceremonial connections to the rivers and everything the rivers are connected to,” said Burrows. “Events like these are a great way to bring people together and share the ways people are linked to our rivers.”

“Everything is connected – everyday actions that individuals make potentially impact ecosystem health – this is a huge educational opportunity.”

Blake added that pressures from development will continue to increase as populations expand in many areas of BC and that, “Habitat will continue to be lost when we do not appreciate fully the value of our aquatic resources. Plant and animal populations which depend on undisturbed land will be threatened.”

Based on the success of the first Alberni Valley Rivers Day, hosts and organizers have expressed interest in making it an annual event.

According to Blake, organizers will be conducting a review and developing recommendations for improvements such as the possibility of a shuttle from Port Alberni which would make the event accessible to more people.

“It would be great to have more Nuu-chah-nulth cultural elements like stories, music, dance and traditional salmon barbecue,” added Burrows.

If your nation or organization would like to take part in next year’s Alberni Valley Rivers Day, or if you have an idea for consideration, please contact Erica Blake at Erica.blake@dfo-mpo.gc.ca.